Parkinson’s disease (PD) is the second most common neurodegenerative disorder in the United States. The predominant motor symptoms of PD includes slow movement, resting tremor, rigidity, and gait disturbance, which are caused by the loss of dopaminergic neurons in the substantia nigra (SN).

Although the etiology of PD remains unknown, both genetic and environmental factors appear to play a role. Several cellular mechanisms have been involved in PD, in particular impairment of mitochondrial dysfunction, oxidative stress, misfolded protein aggregation such as alpha synuclein localized in Lewy body (LB).

The neurotoxicant 1-methyl-4-phenyl-1,2,3,6-tetrahydropyridine (MPTP) is a specific dopaminergic neuronal toxin that principally inhibits the multi-enzyme complex I of the mitochondrial electron transport chain. MPTP is first converted to 1-methyl-4-phenyl pyridinium (MPP+) by astroglia and then enter neurons through DAT (Dopamine transporter) causing specific dopaminergic neuronal death, and leading to the clinical symptoms of PD in humans, primates and mice. For this reason, MPTP-induced dopaminergic neurotoxicity in mice is widely used as a model for PD research. It has been largely reported that MPP+ causes neurodegeneration of dopaminergic neurones in vitro and provides a useful model for Parkinson’s disease in vitro. The neurotrophins brain derived neurotrophic factor (BDNF) and glial derived neurotrophic factor (GDNF) have been suggested to reduce the MPP+-induced neurodegeneration in vitro. Rotenone as well as MPP+ is also used to induce mitochondrial dysfunction and displays a toxin-based model.

6 hydroxydopamine (6 OHDA) was the first animal model of PD developed more than 30 years ago. This toxin is widely used to generate oxidative stress by production of reactive oxygen species and is relatively selective for dopaminergic neurons since it is preferentially caught by DA transporters.

α-synuclein protofibrils are a major component of LB in sporadic PD and two missense mutations of it cause dominantly inherited PD. This protein is involved in synaptic vesicle function and membrane dynamics. Alteration of α-synuclein induces selective dopaminergic neuron death in several rat models (picture 3). α-synuclein protofibrils may cause toxicity by permeabilizing synaptic vesicles allowing DA to leak into the cytoplasm and participate in reactions that generate oxidative stress. Furthermore, aggregate α-synuclein released from dying dopaminergic neurons in neuropil is able to activate microglia leading to release of pro-inflammatory molécules. 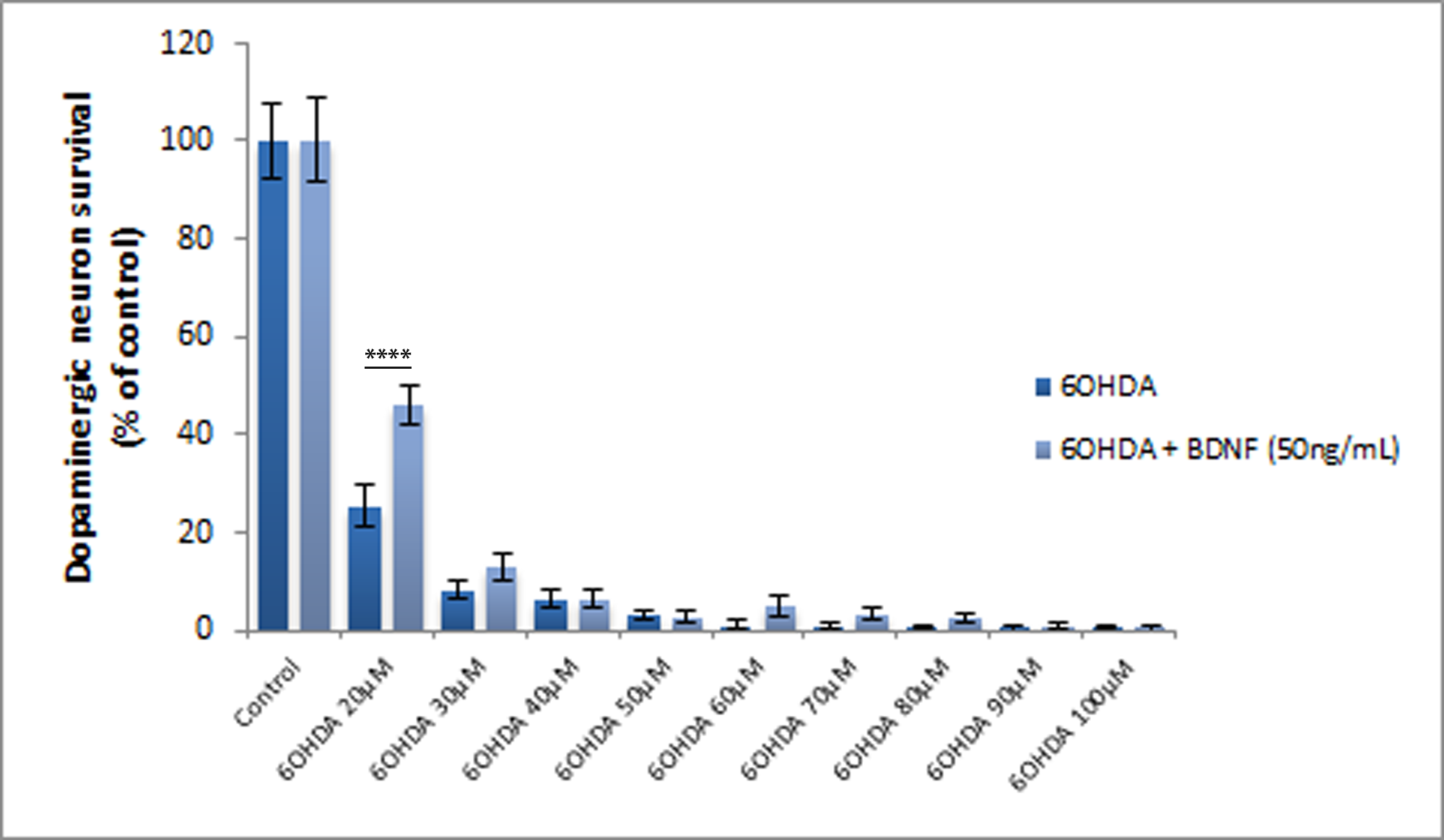 Dopaminergic neuron survival evaluation after a 6 OHDA intoxication visualized by quantification of the number of Tyrosine Hydroxylase positive neurons. 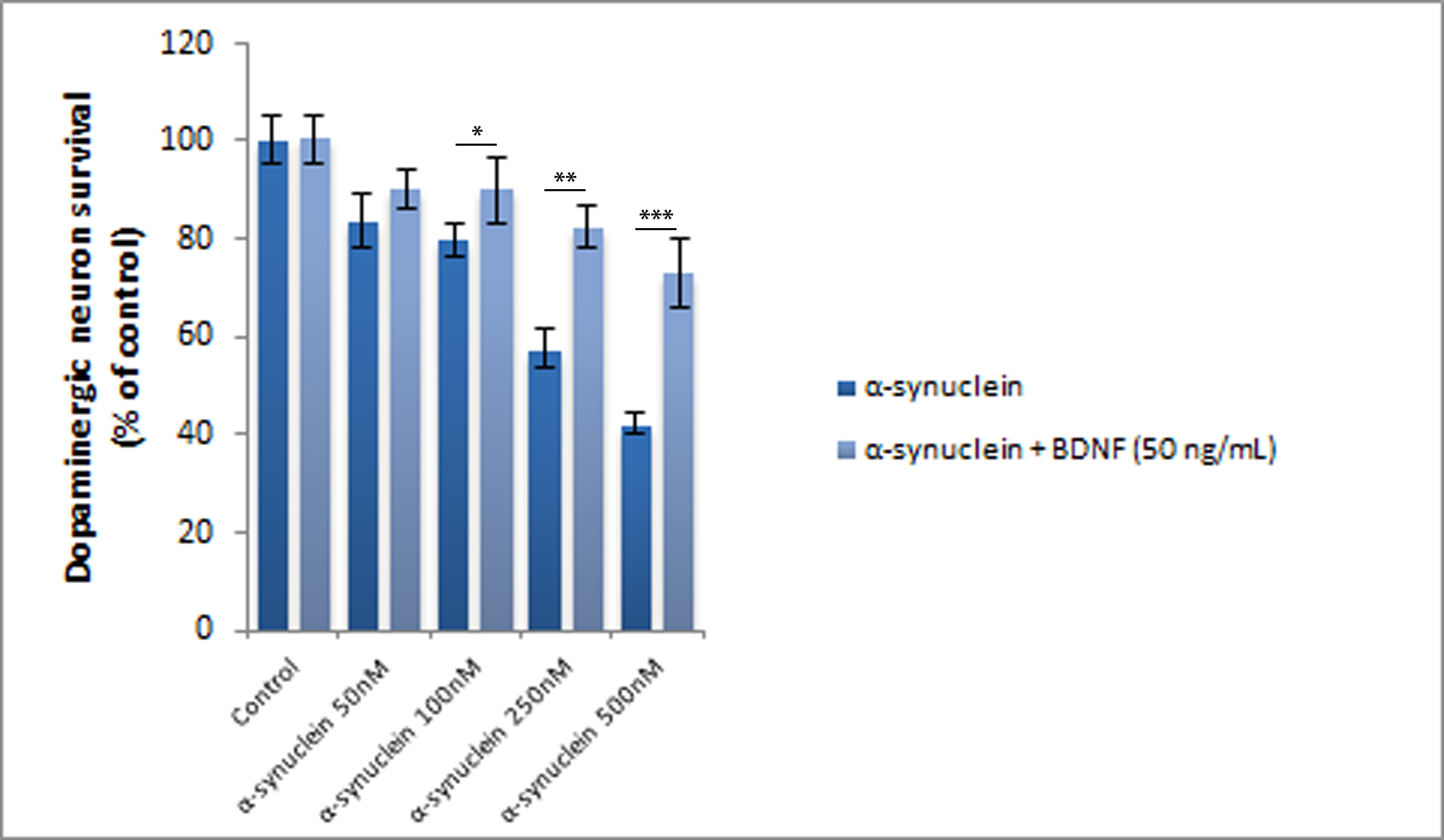 Dopaminergic neuron survival evaluation after an α-synuclein intoxication visualized by quantification of the number of Tyrosine Hydroxylase positive neurons. 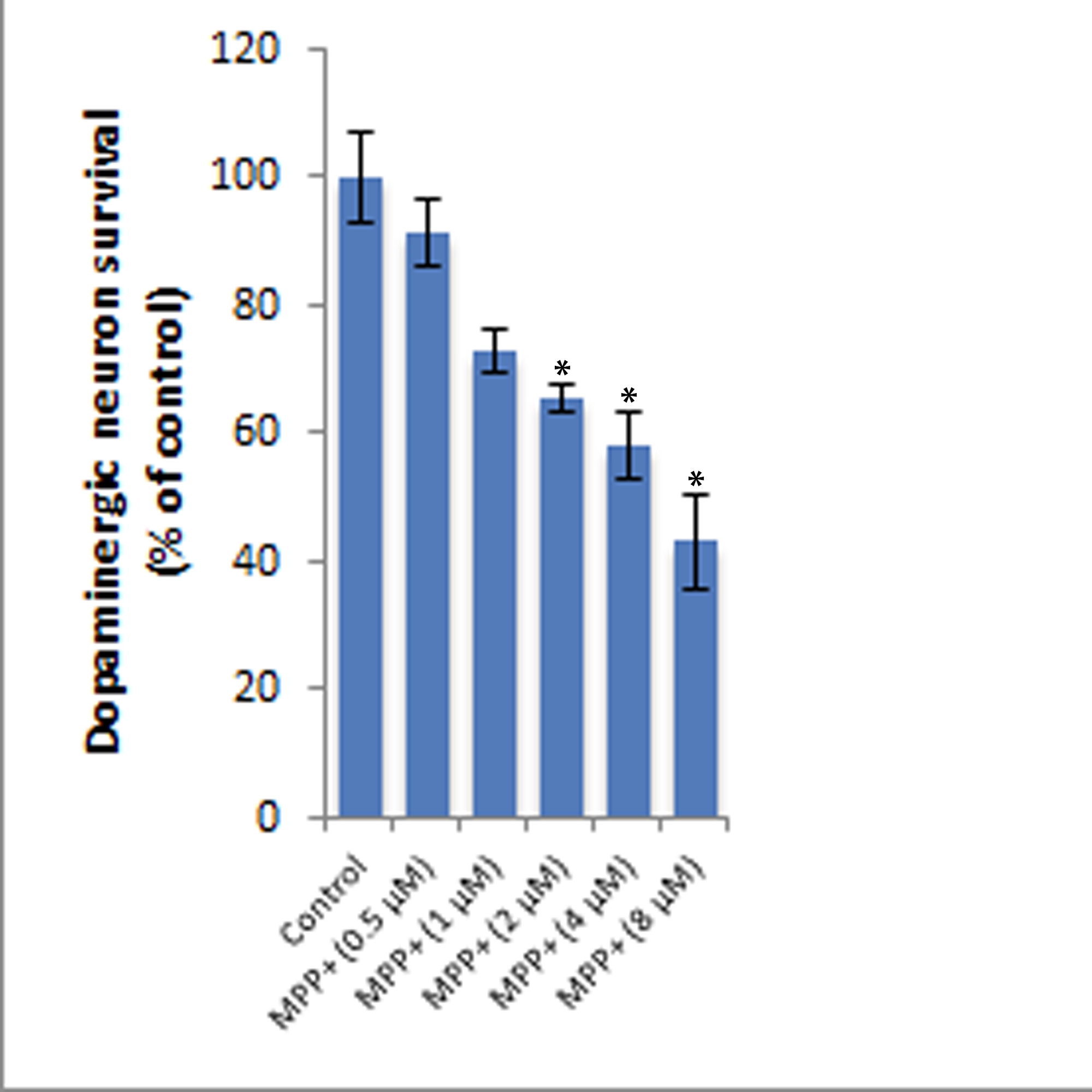 Dopaminergic neuron survival evaluation after a MPP+ intoxication visualized by quantification of the number of Tyrosine Hydroxylase positive neurons.