The pathophysiology of Alzheimer’s disease (AD) is characterized by chronic, progressive neurodegeneration. The precise aetiology of AD is still not fully clarified but is known to be complex and multifactorial. The neurodegeneration seen in AD involves a progressive accumulation of intracellular neurofibrillary tangles, extracellular parenchymal senile plaques, and cerebrovascular deposits; comprised of amyloid-β (Aβ) peptides.

Aβ peptide is a proteolytic product derived through sequential proteolysis of amyloid precursor protein (APP), which occurs as a result of cleavage by β-secretase and γ-secretase. Mutations in the cleavage of APP increase the production of Aβ oligomers. The progressive accumulation of Aβ in the form of senile plaques, which is one of the pathologic hallmarks of Alzheimer’s disease (AD), has been recognized as one of the major causes of AD pathology by triggering 1-neurotoxicity, 2-oxidative damage, 3-inflammation.

Senile plaques are not only able to activate microglia but also to induce oxidative stress by a release of H2O2 causing an alteration of axon membranes, an increase of intracellular Ca2+ and Tau hyperphosphorylation that trigger neurofibrils formation, decrease of microtubule attachment and axonal trafficking. The accumulation of Aβ in synapses and synaptic mitochondria causes synaptic mitochondrial failure and synaptic degeneration in Alzheimer’s disease (AD).

The most abundant Aβ peptide forms found in AD brain senile plaques are the 40 and 42 amino acid forms, the Aβ 1-42 having been ascribed as the main pathogenic form of this peptide. Nevertheless, the number of senile plaques in a particular region of the AD brain correlates poorly with the local extent of neuron death or synaptic loss, or with cognitive impairment. Recent studies show a strong correlation between the soluble Aβ oligomer (AβO) levels and the extent of synaptic loss and severity of cognitive impairment.

Neuron Experts developed an original method to generate with human β amyloid 1-42, a solution of AβO; forms of Aβ proved to be toxic. 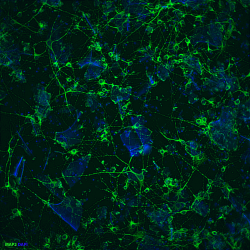 Synaptic loss visualized by the overlap between PSD9.5 and synaptophysin after a β-amyloid intoxication depends on β-amyloid concentration and incubation time. 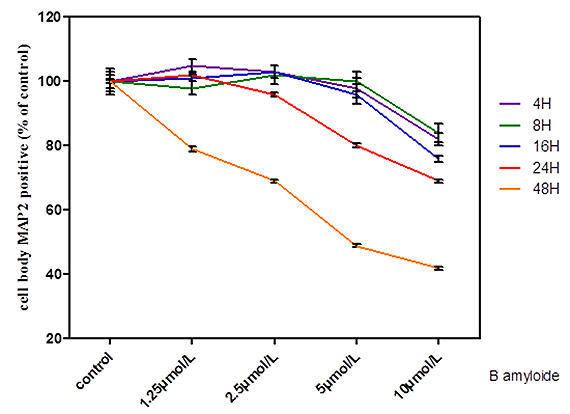