Stroke and dementia represent a major health issue as they are associated with significant morbidity and mortality. Although the physiopathology of these diseases is complex and multi-factorial, ischemia (oxygen / glucose deprivation) and ischemia-induced excitotoxicity are two common features.

Vessel occlusions (ischemic stroke) account for 85% of all strokes. Subcortical ischemic vascular dementia (SIVD), a form of multi-infarct dementia, has been proposed as a subtype of vascular cognitive impairment, characterized by lacunar infarcts that represent 20-30% of symptomatic stroke.

A significant portion of ischemia-induced neuronal damage is mediated by excitotoxicity, an excessive accumulation in the extracellular space of excitatory amino acids such as glutamate, which is the major excitatory neurotransmitter in the brain, leading to toxic increases in intracellular calcium. 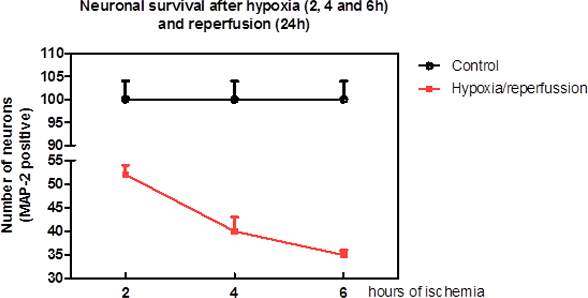