Skin pigmentation is mainly due to melanin, which is a pigment synthesized by melanocytes and transferred to the cytoplasm of the keratinocytes. Disturbances of its synthesis lead to abnormal pigmentation of the skin (lack of skin pigmentation or skin patches).

Sensory neurons and melanocytes have the same embryonic origin. In addition, these two cell types have relatively similar morphology characterized by the presence of a cell body which emits extensions. Sensory neurons play a role in the mechanism of melanogenesis via keratinocytes. Indeed, the activation of keratinocytes by the neuropeptide CGRP causes the release of several factors, one has been identified, as being prohormone Pro-opiomelanocortin (POMC). One of POMC maturation products, a-MSH (α-melanocyte-stimulating hormone), increases melanogenesis by attaching itself to the MC1R receptor (melanocortin 1 receptor). 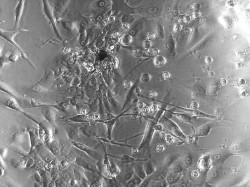